The capital city of the United Arab Emirates is turning into an international cultural hub: the Louvre Abu Dhabi has already welcomed two million visitors since opening in 2017. Now the “Qasr Al Hosn” fort has been converted into a new cultural campus, more museum buildings are set to follow in Abu Dhabi. 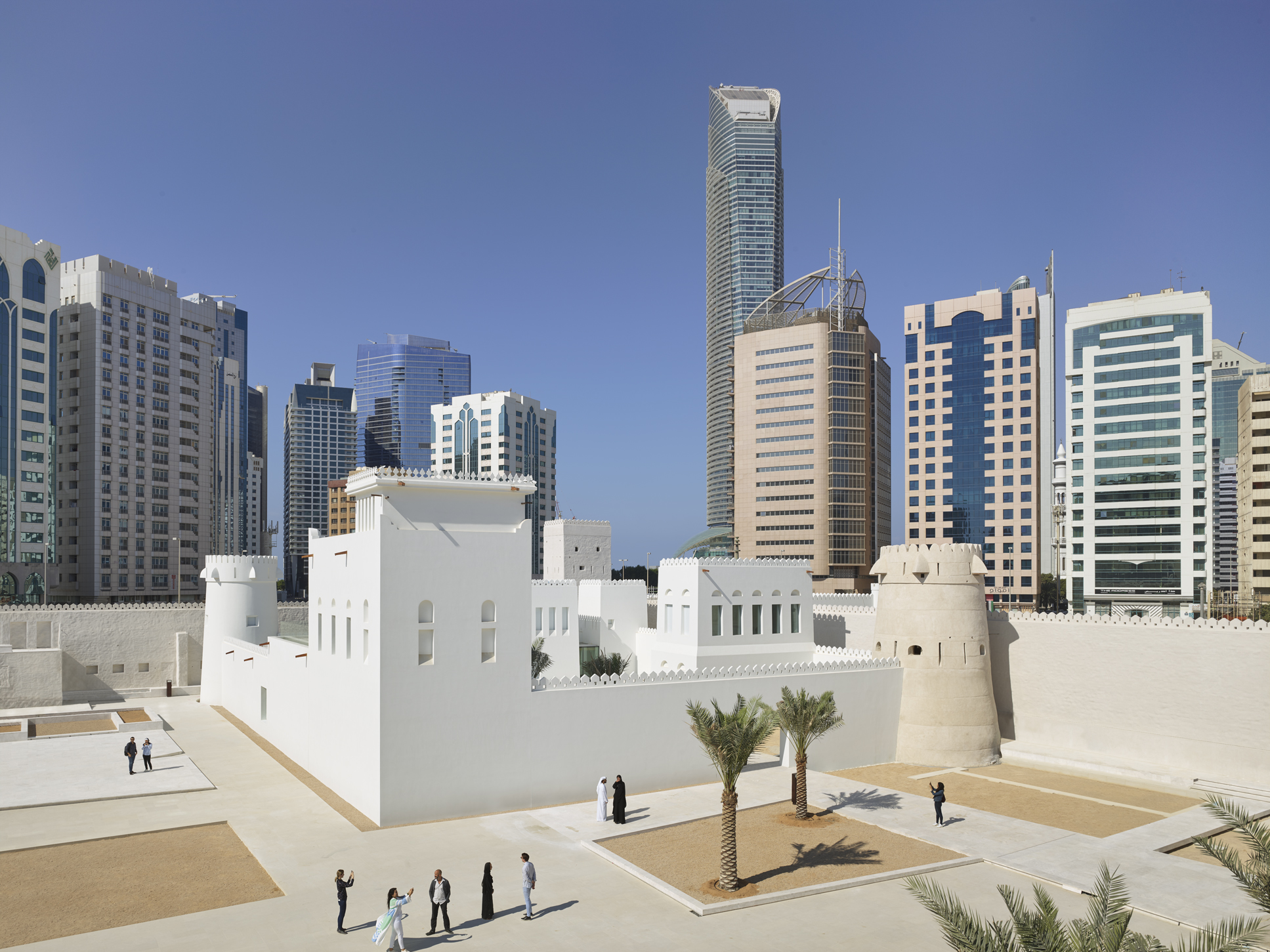 A lot has happened in the emirate of Abu Dhabi, which gained independence in 1971 under the rule of Sheikh Zayed bin Sultan Al Nahyan. Mineral resources have made Abu Dhabi rich and in recent decades have enabled the city to grow extremely quickly.

But unlike in Dubai, the government here focuses on promoting culture and art – and less on mass tourism by those wanting to experience a desert Disneyland with an artificial hotel island and indoor ski halls. In 2018 the city celebrated the “Year of Zayed” to mark the year in which Sheikh Zayed – such an important figure for the emirate – would have turned 100 years old. He laid the foundations for today’s infrastructure. His old palace, the “Qasr Al Hosn”, reopened with a new cultural campus after lengthy reconstruction work.

Mohammad Khalifa al-Mubarak, Chairman of Abu Dhabi Tourism and Culture Authority, talked about the project: “The cultural relevance is of course very important. The cultural centre appeals to every Emirati living in the United Arab Emirates. It makes up a large part of their cultural history. It is where the stories of the country and its people are told. The fact that there is such a historical place here in the centre of Abu Dhabi is tremendous. The place will give people a chance to relax and imagine what Abu Dhabi looked like 100 or 200 years ago.” 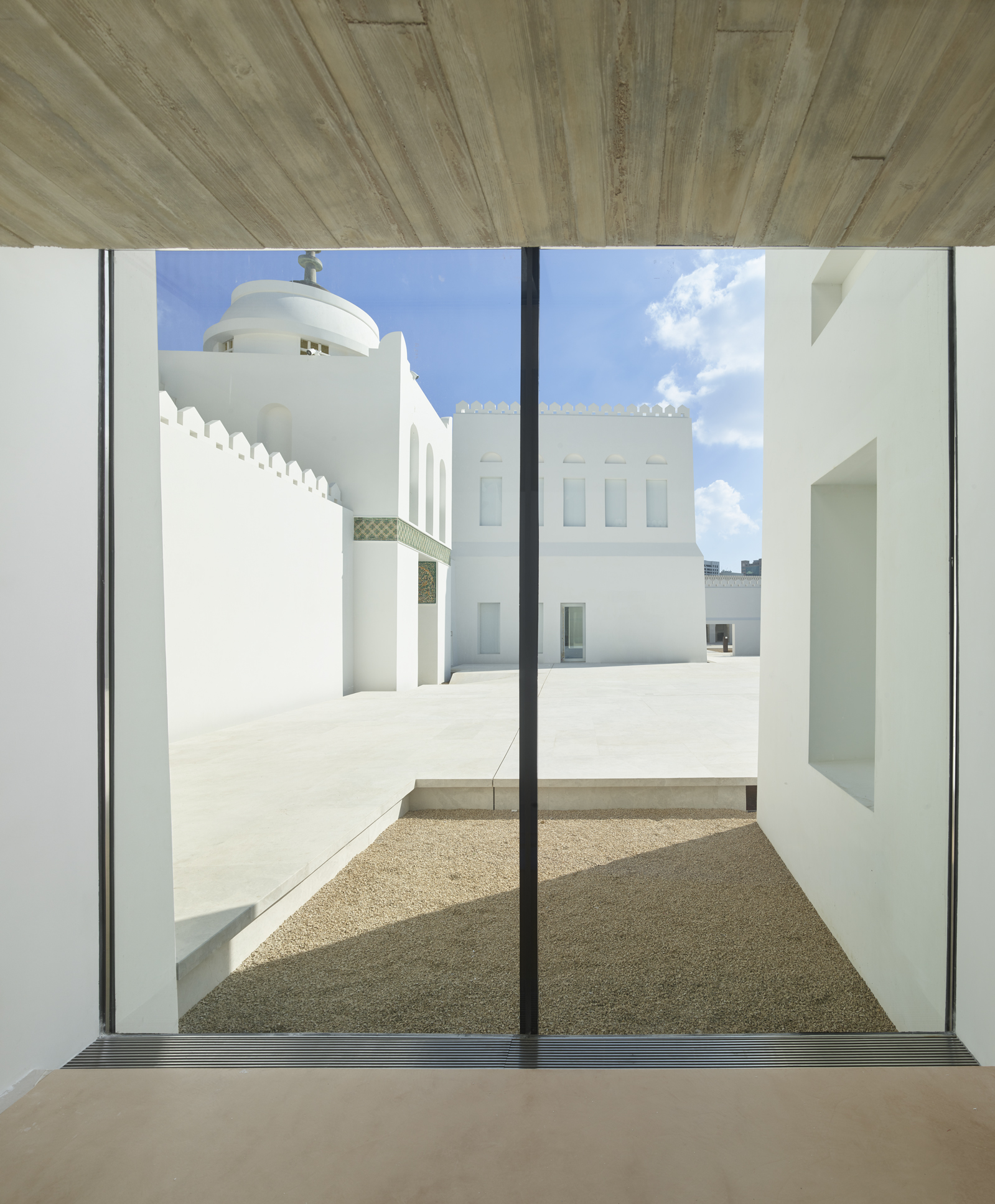 Mohammad Khalifa al-Mubarak is responsible for all of the emirate’s cultural institutions. As an important part of the government, this agency has set itself the goal of transforming Abu Dhabi into an internationally relevant cultural hotspot, while at the same time getting across the cultural heritage of the United Arab Emirates. For example in the “Qasr Al Hosn”, built in the 18th century. It is one of the oldest buildings in the region and now has a permanent exhibition showing how the people and above all the royal family have lived and governed in the last 200 years.

The fort is now surrounded by a 140,000 square metre cultural area with a palm garden, amphitheatre, a workshop for traditional crafts and a cultural foundation. Maya Allison is Director of the NYU Abu Dhabi Art Gallery and curator for exhibitions at the reopened Cultural Foundation, which primarily exhibits artists from the Gulf region.

This Cultural Foundation project was a passion of hers, because it was a question of finding out how all the artists actually became artists at a time when there was no infrastructure or support for them. Not long ago there were no art academies, no art galleries and no exhibition spaces in the Emirates. “Why become an artist? It was as though they had no choice but to become artists in this world without infrastructure,” says Allison. 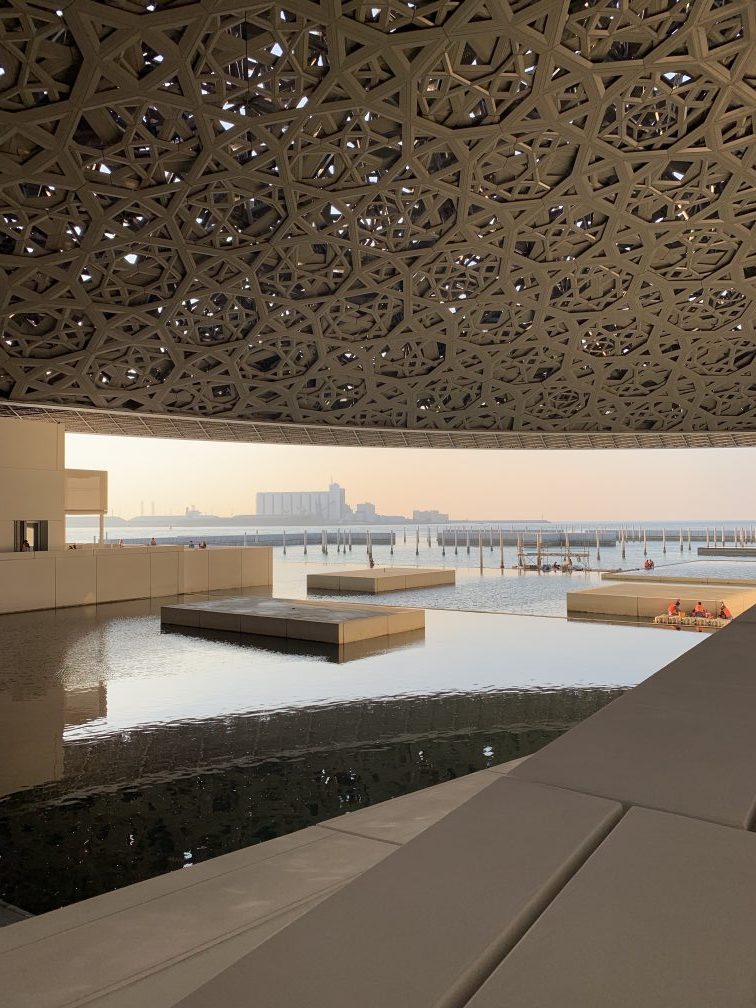 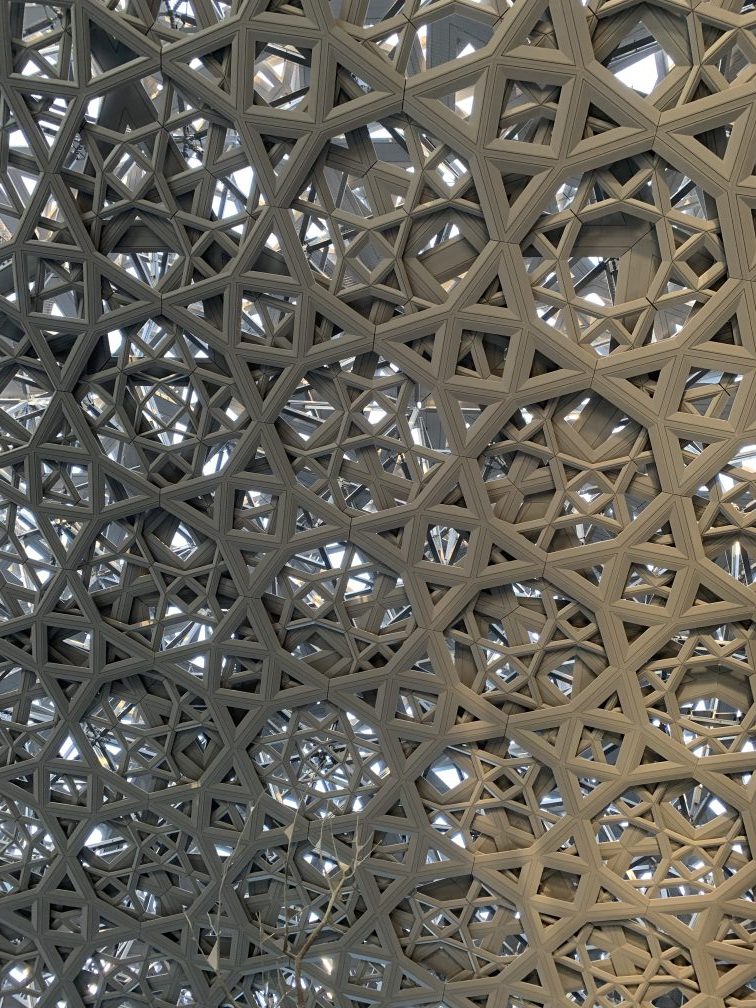 It is striking that it is not so much the works of art and their significance that stand out, but rather the history of the artists themselves, their origins and traditions. The cultural area is intended to subtly bring the Emirati closer to their cultural history. New contemporary art trends and modern galleries have been present in Dubai for many years. And since 2007 an internationally successful art fair – the Art Dubai.

The Louvre has been on Saadiyat Island in eastern Abu Dhabi for two years, which has also been home to the Manarat Al Saadiyat, a museum for contemporary art, since 2009. The Guggenheim Abu Dhabi will soon open right next to the two museums. It already has a collection of purchased works. But other museums are also in the pipeline, explained tourism boss Mohammad Khalifa al-Mubarak.

“We have a relatively clear cultural strategy here. A few months ago we announced that we would be restoring the Al Ain National Museum in Dubai, the oldest museum in the United Arab Emirates dating from 1971. We hope to reopen the museum in December 2020. We have plans to open many different archaeological and contemporary museums here in the next five years.” 1 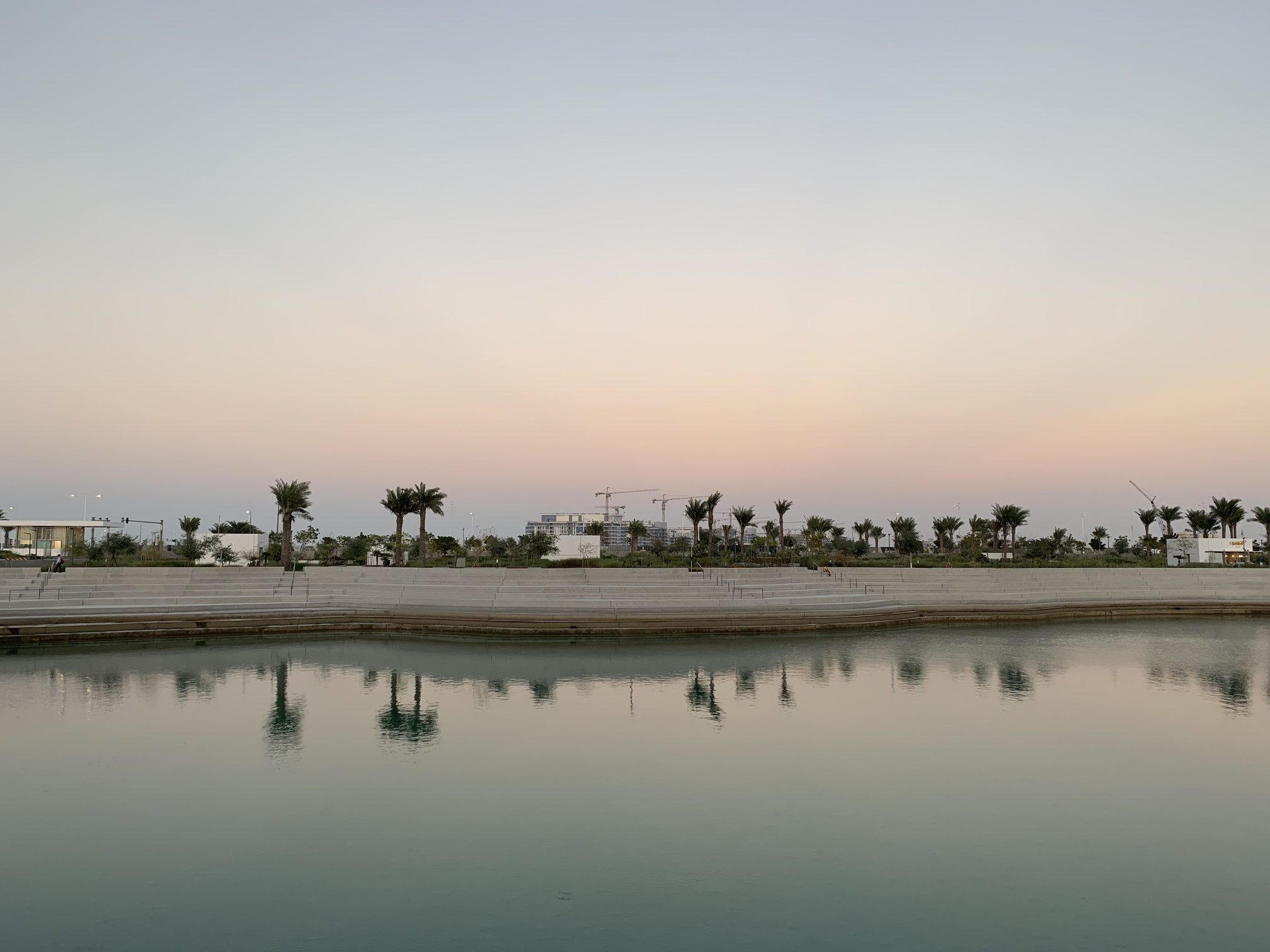 "We need food, we need a roof over our heads, we need infrastructure and then education." Maya Allison

The emirate’s plans for the next few years are not unrealistic. There is enough space here and the financial means to realise any number of projects. But where are all the visitors – whom the museums and facilities need – going to come from? Maya Allison, who has lived and worked in Abu Dhabi for more than ten years, is confident. After all, the country is still young.

“As far as I know, there was no road between Abu Dhabi and Dubai in 1970. There was only sand. And they spent the first 20 years constructing roads and buildings. I think there’s this well-known need hierarchy for people: we need food, we need a roof over our heads, we need infrastructure and then education. And after education, we see how the arts can bear fruit and develop. I don’t think this is directly about a particular interest, rather that it is now possible to promote cultural history and contemporary art,” says Allison.

Abu Dhabi seems to be different from China, for example, the place where in recent years contemporary art has become increasingly present and popular due to growing wealth and where it has also been discovered as a consumer good. 2 Here, the impressive cultural centres, museums and new acquisitions in the millions serve for the time being only to convey art. Like the saying goes: we show you what we have, and we show you who we are.